This morning I sat down to write a blog post about the how to place your recyclables on your kerb for maximum shaming of your non-recycling neighbours, because I am a friend of the earth, but not of my neighbours. My thoughts, however, which at the best of times tend to be disorganised and/or possibly psychotic kept getting scrambled by this:

Jesus. I know there’s an especially hot place in hell for the inventor of the weed-whacker. I just hope the Devil junks the rusty ol’ pitchfork and replaces it with a 52cc petrol-fired rotating blade Ryobi in his honour when he gets there. I said the serenity prayer, “Help me to accept the things I cannot change …”, and then I accepted the fact that I feel pathological anger towards weed-whackers. Admittedly, not just towards weed-whackers.

We conduct our lives to a terrible symphony of squawking poodles and hadedas and fucking Egyption geese, the scream of angle grinders over the low bellyache of the engines prowling the construction sites that surrounded us on every side in Fourways, the snarl of lawn-mowers, the insistent bleating of iPhones and BlackBerries, and in the background, the remorseless drone of the traffic, which in the darkness starts to sound like a Brillo pad scouring the inside of my skull. I think of all of these things with hatred in my heart, including “the traffic”, which exists as an evil entity, separate from me. However, I really turn Hannibal Lector when I’m actually in the traffic, jerking spasmodically down the clogged arteries of our urban sprawl through this:

Now, if I did yoga and were more Zen, I’d just philosophically observe to myself that for all the last century’s material and technological advances, history will not judge our overall quality of urban living kindly, and smile wryly. Sadly, though, as I ramp the kerb to dodge the taxis hurtling down the on-coming lane like a fleet of battered second-hand tanks under the command of a mustachioed colonel somewhere in the deserts of North Africa, I spy this through my windscreen and my hypothalamus says, Screw Zen, baby. We’re not in a Zen “place”. Here, take a smack of adrenaline and some pure unadulterated cortisol: 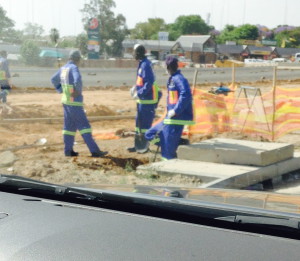 Given that I’ve been looking at this exact scene on freeze-frame for almost two years on my godforsaken stretch of the William Nicol, I’m pretty confident that these okes must be on their final written warning, following their third disciplinary hearing, and are facing instant dismissal the second their boss sees them slumped over their spades, waiting for four o’clock to roll around.

I mean, if it was me, and I’d told someone to dig a hole, I’d be chipped off if I came back in my bakkie and found him and six others all loafing around watching the one lasher down in the gat again. Do they thinking I’m running a bloody charity here? How many times do I have to tell them to get back to work? What the hell – do they think I’m going to dig my own damn hole?

So to speed things along, I wind down my window and while choking on the fumes and thick mucous from my allergic rhinitis, I yell stuff like, ‘When you stand around doing nothing you’re stealing from your employer. Is that what you want? Huh? Is it? To be a thief?’

I’ve just come back from a quick reccie by the front gate to record this for you:

The first clip was recorded outside my toilet window, and now, now I’m being assaulted through my own front door. I know what you’re thinking. You’re thinking, You’ve got to be joking, Lauren, this cannot be your life. How do you take it? I don’t know is how. And you still don’t know the half of it, man. I have had to take this EVERY Saturday since we moved in here seven years ago. Some people have crack dens next door, which must be annoying, sure, but I have lawn-obsessed weed-whackos who apparently like to wait all week to watch their weed-whacking live from their patio every Saturday. And somehow their Zimbo gardener manages to make the lawn-mowing, weed-whacking ritual last four and half hours despite the fact that their garden would be a disappointment to a flippin’ hobbit.

I wrote a scene in Cry Baby where the fictional husband, Michael, exacts vengeance for their fictional neighbour’s weed whacking habits. This scene, I am prepared to reveal under the freaking circumstances, was not entirely fictional. It culminates in the following exchange between Michael and the neighbour’s gardener:

A minute later, the gardener emerged from the back door of the kitchen and walked towards the gate where Michael and the boys and the dogs thronged. He halted a few feet away.

‘He says, I must cut the grass – he can’t help it if some of the noise goes over the wall.’

‘Well you can give him a message from me … You tell him that I’m going to go home and get out my air rifle to blow away Indian mynahs. I can’t help it if some of the bullets go over the wall. You got it?’

‘You got it, Doug?’ Michael bellowed through cupped hands. He banged his palm painfully against the gate in the fence. ‘And if I look out my bedroom window and have to see you in a fucking Speedo again, Doug, jumping up and down on your mini trampoline with a pair of dumbbells to ‘Hang on fuckin’ Sloopy’, I am going to get out my own goddam weed whacker and do the world a favour, you complete wanking wanker.

That bit was fictional. In reality it went down like this:

One Saturday afternoon, after I’d already put up with the lawn-mowing torment for so long I was numb inside, I’d just flopped down on the sofa on our patio, when sure as some arsehole in a black X5 is going to queue jump turning right onto the William Nicol tomorrow morning, the weed-whacker tore into my eardrums. It sounded exactly like this (and BTW I just dashed out onto the balcony to get it for you – from the other side of the garden now – so you can really live the moment with me):

The weed whacker fell silent. For the span of a breath there was a complete absence of sound, and then the cry of a lone hadeda pierced the silence and the weed whacker cackled back to life.

‘No. And if we’re being honest here, I don’t like your sarcastic tone. Just because you’re being all “Zen and the Art of Motorcycles” doesn’t mean that we all must join you in your life of sanctimony and bullshit, judging anyone who needs anger management class and gloating about your Zen-ness. Russell, come here!’

I grabbed Russell, then about five years-old, and stormed up the side of our house to the front gate. I’m not sure exactly what we mean by ‘stormed’, but still, it seems as a hackneyed cliché, fitting here. Anyway, the front gate was closed. I tried to wrench it open with my bare hands, but alas, I had to order Russell back inside to press the button.

God don’t you just hate that? The waiting and waiting, the screaming at the kid, Jesus what are you doing?, the storming back inside to press the button yourself because he still can’t reach it, the useless midget, the jamming of the button over and over because the gate took too long to open and now it’s closing because you pressed again, the whining and the sweat. Life is so hard.

Finally we made it out into the street. This is what we found:

Just look at their gate with the white rose hedge looking all picturesque, but behind the façade of fretting, mawkish sentimentalism for the glorified past, comes the demonic howling of Satan’s industrialised pitch fork, and something even more sinister that you probably didn’t even notice. I’ll give you a clue:

1. There are no recycling bags on the pavement. 2. It is recyclables collection day. 3. They don’t recycle.

‘Look Russell,’ I said, ‘This is what we call “a teachable moment”. Consider it part of your assertiveness training. You are going to stand here outside Paul’s gate and scream “Shut Up!” as loudly as you can. And you are not allowed to stop until either you or the weed whacker are dead. Do you understand me? I will be over there in those bushes.’

Russell’s face was awash with savage delight. I have an instinct for picking the right kid for these situations. William, the little wretch, would have put up some resistance.

Take that, you bastard, I sniggered as I crouched behind the bamboo thicket, Did you ever stop to think that maybe I’m hung-over? No. You only think about yourself. Well, who’s sorry now?

After I had unleashed Russell and our pack of runts yelping and combing their fence line for a break, it all ended like this:

What in God’s name is the point then? This is supposed to be a suburban survival crash course and this is not helping, right? Don’t feel ripped off, because, that, people, was the day I founded The Scheduled Drug Club, of which I am a proud member and president for life. We meet on the last Thursday of the month to discuss the side-effects of the drug of the month. Book club is so last year. What do you say?

Okay, if you can’t spot name at least five anti-anxiety meds with a scheduling status of five or higher, you’ve never even tried to see if Viagra is a his-and-hers drug, and your experience of recreational narcotics is confined to that one time at the Ministry of Sound in London after your Contiki in 1994 and the Swazi gold diluted with catnip that they flog behind the Zennex on Main Road, well I’m not sure you’re scheduled drug club material, yet. Don’t despair. For you I still have this:

On account of humanity’s grotesque fecundity and our unfortunate continued dependence on the fossil fuel combustion engine, modern urban living might on occasion drive you into the bushes outside your neighbour’s house clutching an iPhone in your sweaty mitt and laughing manically. You are only given a spark of madness, to borrow from the late great Robin Williams. You mustn’t lose it.